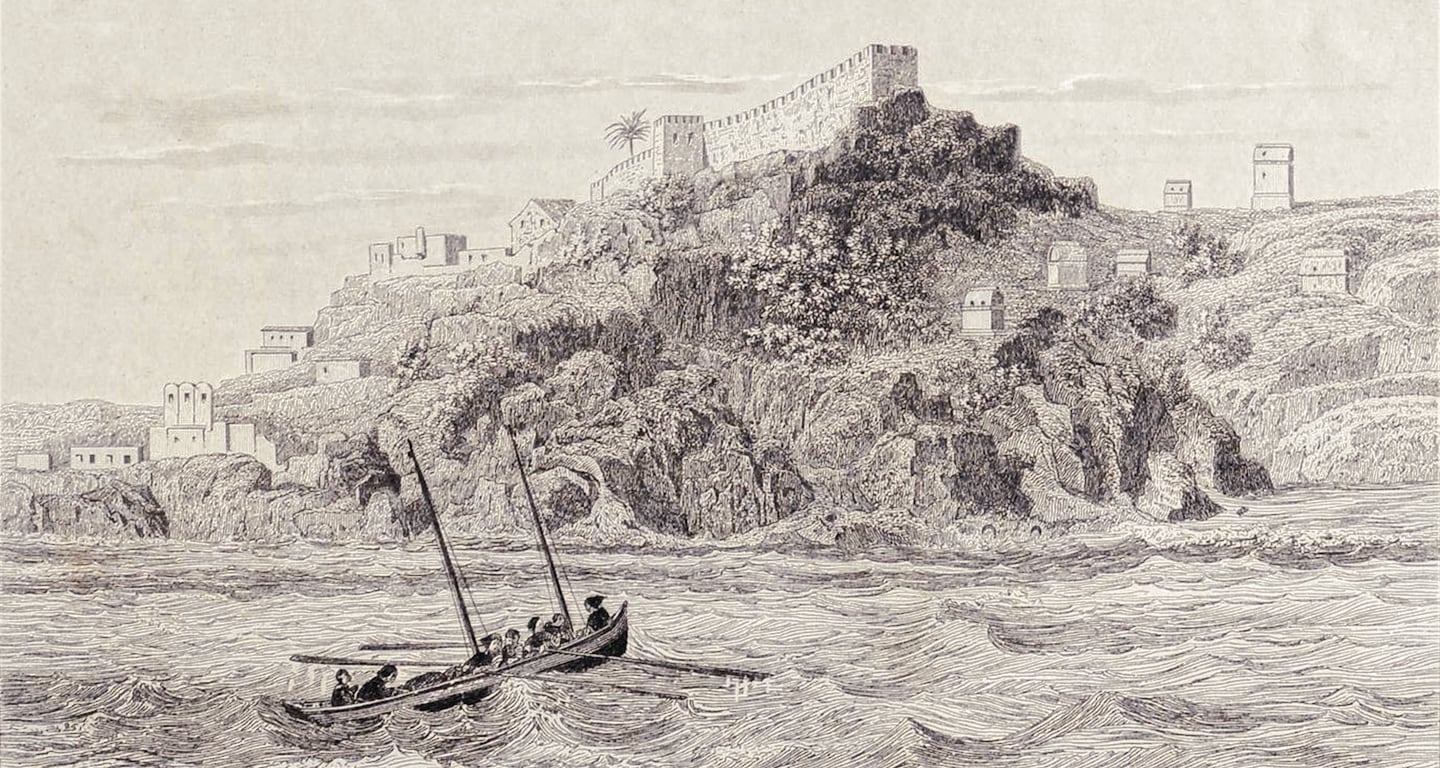 In 1817, a compilation book was published with content selected from the impressions of British travelers from their journeys to the East. Its editor was Robert Walpole. This is a book known as Walpole’s Turkey.1 A year later, second edition published, and about two years later, a sequel with a different name was published due to the public interest for the books. The “Greek Inscriptions” chapter of this third book2 includes a letter and the drawings. This letter is the letter of Charles Robert Cockerell, which is of historical significance as it was the first publication showing the character drawings of the script that would later be recognized as the Lycian alphabet.3 Begins with “Relating to the inscriptions engraved in the annexed plate” and continues with the preserved letter setup. The text in full:

I have the pleasure of sending you four inscriptions, collected in Lycia, during my tour on that coast in 1812 ; the character in which they are written is found also at Telmessus and Myra.

No. 1. was copied near the town of Phineka4, on the border of the plain, and is remarkable for its termination in Greek : the monument on which it is inscribed is of marble, about 18 feet (5.49 m) high, and of the most elegant architecture ; its execution is hardly inferior to that of the best works at Athens. The upper portion, as well as the lower, was calculated for the reception of the dead ; but each had long since been despoiled of its contents.

Nos. 2. and 3. were found at Kakava (Kekova), on the shore opposite Dolichisté ; they are exceedingly well cut on the face of a rock, and each of the excavated chambers contained six sarcophagi ; the projecting cornice had, in that mild climate, preserved the inscriptions entire, and even the red colour with which the characters were marked.

No. 4. was found on a tomb of the same kind, but which had in addition upon the frize a νεκρόδειωνον (Sic)5, consisting of ten figures about six inches high, in bas relief, and of the best times.

It is remarkable that all the sculpture found on these monuments is evidently by Greek hands, and in the purest style of art ; less rigid, indeed, than that which is commonly understood by the appellation of Etruscan, but still severe, and having many of the characteristics of that manner.

At Phineka, also, is a tomb of great beauty, on the sides of which, in the solid rock, are figures of low relief in procession, of the most elegant design, and as large as life ; they bear offerings to the tomb, four on one side, and two on the other. To the west of Kakava is another, of fewer figures, but of equal merit.

The bas relief on the side of No. 2. represents a youth, holding in his left hand a piece of drapery, perhaps a net, under which is a partridge : it was probably intended to commemorate some antient (Sic) sportsman, who had found Kakava not less abundant in that species of game than it is at present ; whence, indeed, it derives its modern name, as Meletius tells us.

The architecture of these tombs, excavated in the solid rock, occurs all along the coast of Lycia, and seems peculiar to this country ; some have conjectured them to be funeral piles ; but, however this may be, it is evident that they are in imitation of a wooden construction ; the cornice is formed of a beam laid on transverse rafters, unsquared, and in their natural state ; and the framing (as it would be technically termed) shows the cross pieces of which it is formed, halved upon each other, and the ends left uncut ; the bottom, or sill, has the form of a piece of ship timber applied to this purpose. There are other examples in the roofs of various tombs, presenting a similar character ; they have the form of a Gothic pointed arch, and are like the section of a boat reversed, thus :

The doors were in pannels, and one of them was made to open by sliding back in a groove ; of all these the execution is very perfect, &c. &c.

The first stage of grief

Editor Walpole’s writing about the letter6 is as interesting as the letter itself, but has a historical significance in the opposite direction:

“It would be an useless labour to endeavour to decypher or explain the characters in use among a people of whom we have no literary records, and from whose monuments we have not yet obtained a sufficient number of inscriptions to afford us the means of comparing them with each other, and with the Greek.

The latter appears on these sepulchres to be united with the language of the Asiatics.

The vicinity of the two people led to the use of the two idioms; and the barbarians7 (for so the inhabitants of this country were called by the Greeks) prove the intercourse which must have subsisted between themselves and the colonies established among them, by the style and mode of structure adopted in forming their tombs.

But the Greek language was corrupted in consequence of this communication. When the Ionians arrived in Asia Minor, by intermixing with the Carians, they vitiated their pronunciation ; they altered the quantity of the syllables in some words.”

“Whether we accept or not of the whole of these statements, we see plainly that they contain allusions to the language in use among the people of this part of Asia Minor, and which, as might be expected, impaired the purity of the pronunciation of the Greeks, who established themselves among them.”

Maybe this is how the “purity or impureness of something” debate started, but without anachronism we know for sure that the 19th and 20th centuries were fundamentally shaped by these values, their derivatives and their cultural outputs.

Studies on deciphering the Lycian script will have begun from the end of the 19th century, “appears to have been first brought prominently to notice by Sir Charles Fellows” (Conder 1891). Grotefend says that the fact that one of the first examples found was bilingual (Lycian and Greek, Inscriptio bilinguis) encouraged him.9 This is the inscription Cockerell encountered “near Phenicia,” as he states in his article, but Grotefend places the inscription in his work as “near the city of Phineca, among the ruins of the ancient Lycian city of Myra”. The starting point was right, the destination was erroneous.

By deconstruction, maybe we can turn this into a proto-modern error that may be both non-destructive and instructive:

Moriz Schmidt, one of the contributors to the corpus, places Grotefend both in the first column of his Lycian alphabet table and at the top of the Lycian language deciphering studies, in 1868 by stating, “by both these essays he merits the honour of being called the first decipherer”.10 He does not count Saint-Martin’s 1821 “Observations on the Lycian inscriptions discovered by M. Cockerell” paper11 as a “fundamental commencement”.

Mr. Cockerell, on the other hand, was busy with his architecture career during this time, so it would take almost two decades before the interest and curiosity in Lycia and Lycian would not be considered unnecessary again. The expression of this accumulation of curiosity would be so intense that it would no longer be enough to just travel, but the historical artifacts in the destinations would be removed, loaded onto ships and transported to London.

In his preface note,12 which also includes references to Cockerell and Walpole in Tituli Asiae Minoris, Kalinka mentions that he first saw Lycian characters in a J. Hammer work in 1811; however, Lycian writing did not appear in any of the materials in that study, and the majority of the characters in the tables that he noted and which the author included under the heading “Seven inscriptions in undeciphered alphabets” at the end of the book only slightly resemble Lycian letters — some look more like Carian letterforms, others are either not copied correctly or not printed correctly.13

A similar point is made in the Daniel Sharp’s letter which is an appendix to the book of Charles Fellows’ second excursion. About where and from whom the Lycian writing was first seen:

“The inscriptions copied by Mr. Cockerell, and published in the Appendix to ‘Mr. Walpole’s Travels’, were the first inscriptions in the Lycian language made known in Europe.” 14

In stark contrast to Walpole, Fellows on a mention of the Xanthos Stele a year after this book, would write: